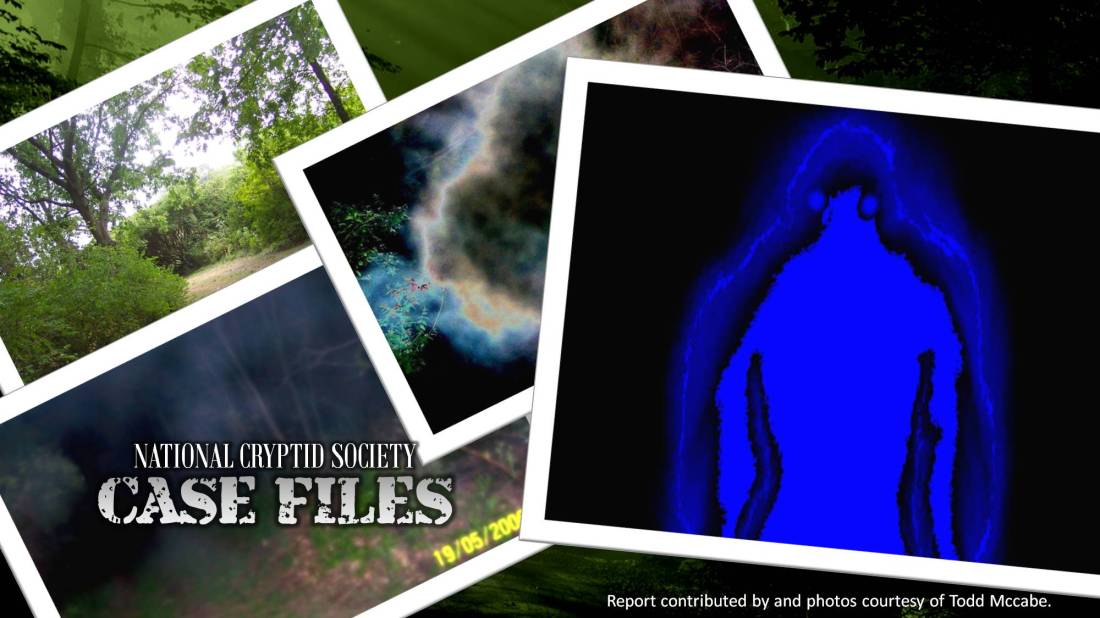 Report contributed by and photos courtesy of Todd Mccabe.

“On may 19th, 2000, I was hiking an hour after sunset in the University of Wisconsin Arboretum located in Madison Wisconsin. I rounded a bend in the large trail and saw… If I had seen it in The British isles it would be a Fairy, Scandinavia a Troll, and Japan, Yokai. As an American, I get the worst possible costume in the ubiquitous shape-shifter repertoire. I saw a giant luminous humanoid, nearly seven feet tall with it’s back to me walking down the trail. It was fifteen feet away, and I can see it’s massive muscles in it’s legs, buttocks, and back. My god, the shoulder width on this thing had to be four feet across. As an American I get: “Ghost of Bigfoot.” -Yuck

(Pic 1 is a map of the Arboretum, and the red at the bottom left is the spot. Pic 2 is the bend in the trail, and 3-3 is where the entire sight took place)

During the nearly 5 minute siting, which is an eternity for seeing weird stuff. It’s luminosity did not reach the brush flanking the trail, or the ground as it walked. It was a light that only revealed it’s source.

I came to a stop in shock. After few moments, I started walking backwards, hoping it did not turn around and see me. Once out it’s line of sight, before I took a step, my resolve to run changed. Tip toeing to the bend, I peered around the foliage to see if it was still there. To my odd delight, it was roughly twenty feet further than when I saw it.

Seemingly oblivious it was being watched, I noticed something odd about it’s walk. Which ever was the weight bearing leg, slid back, and for every stride it lost a third of it’s advance. The ground was dry, so there is no accounting for this slide. As it continued down the trail, something was happening. It’s appearance was changing. It was becoming less three dimensional, and more flat. Like a two dimensional image on paper. Granted I was some distance from it, but it was so big it mitigated the span between us.

Feeling I was in no danger, I stepped boldly out on the trail. The giant luminous humanoid stopped, and turned around. Wow, to lock eyes with something like that. Suddenly, my vision did a leap forward, or better put, the distance between remained, but it appeared ten to fifteen feet in front of me. (that is the best I can do describing it) The face was vaguely human, but the area around the mouth protruded like an ape. It had dark pools where its eyes should be, but I could not see a nose or ears. (Pic 3-5 are more detailed than what I saw that night) It slowly turned around, and resumed walking.

I became distracted by shards of light that were every color of the rainbow in peripheral vision. I looked at the source. It some distance from both us and beneath the tree tops. I liken it to a brilliant light set in a cave that illuminated a stack of uniform boulders. I am at an angle, so I cant see the source of the light. That is the best I can do. In those few seconds, the shape changing of the giant luminous humanoid had obviously accelerated.

It’s final form had three distinct parts. The humanoid shape was flat blue with ragged edges, next was a thin outline in black, and finally, a two toned blue out line. (see the last pic, I did this image on a PC art program) The head, had two blue orbs for eyes. (remember, it’s back was toward me) It was now a flat, two dimensional image.

The brilliant light vaguely lit a distorted tunneling going from the ground and up towards it. The Shape-Shifter turned off trail towards it. Now, there should be trees between us, and yet, I can still see it. As it walked up the tunneling, it’s lower half dissolved, and when it reached the light… Blink! All gone. WT and F!

Maybe it was planet Venus? Possibly it was a large garbage bag used for Christmas trees that someone doused in glow in the dark paint, and the breeze ( which I don’t recall) made the luminous garbage bag appear like a giant humanoid walking down the trail. The light below the tree tops was, by some weird law of physics, coming from car lights through the trees behind me and appearing in front… Hmm… Maybe there is no weird law of physics at work here. It must have been a bird nest that had a mirror, and brown cotton balls in it, and some car headlights reflected into a two story house onto an angled bathroom mirror that reflected the light to the nest, that must have also contained something to refract the light before it reflected off of the mirror and into my eyes.

I would spend the next six years, at all hours of the night, in all seasons, and weather, looking for this thing, and saw nothing.

On May 19th, 2006, I waited and waited for it to make an appearance. I got frustrated, and headed out. During the trek to my car, I jingle my keys, and take random pics to let any skunk know I am coming. (I was sprayed once, and never want to through that again) The pics I took that have the images have something in common. They had a blinding flash as if the camera light reflected off of something. I thought there was something wrong with camera, and carried on taking pics which flashed normally.

Once home, I uploaded the pics to see what animals are in it. I have pics of Flying Squirrels, Field Mice, Raccoons, and Feral Cats to name of few. However, the pics with the blinding flash had some cloudy mass that I couldn’t account for. The Camera was fine, and the temp and dew point were far enough apart to toss fog out as an explanation. (I won’t go into the process of discovering what was on the pics.)

Pic 4 is the original picture, Pic 5 is the negative, and Pic 6 was altered to tease out some details by adjusting the Red-Green-Blue colors.

Notice on Pic 7 the shape of the head, and compare it to Pic 6.

Pic 8 is the original. I raised the blue value to get more detail on face on Pic 9.

Pic 10 is a cropped and rotated. Pic 11, is the image I made on a PC art Program of its final form.

I forgot to add that this thing is mentioned in a Wisconsin book about Ghosts. In the horse and buggy days people avoided what they called the Ghost Road. The Ghost Road is now Seminole Highway and it is parallel to the trail where I saw this thing. I quit looking for this thing in 2015.”

All photos and testimonial included in this report belong to Todd Mccabe and has been reproduced by the NCS with permission by Mr. Mccabe.